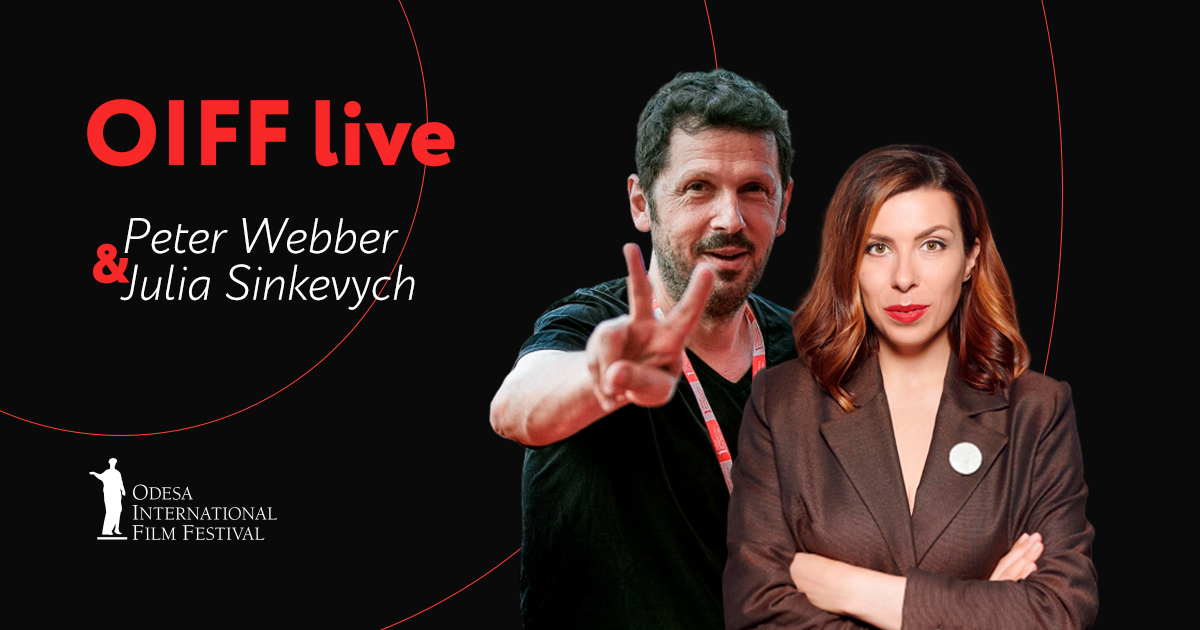 The guest of the second OIFF Live was the British director, producer and screenwriter Peter Webber. The general producer of the Odesa International Film Festival Julia Sinkevych talked with the guest. During the interview Peter Webber talked about opportunities that pandemic provides and possibilities of shooting movies in an era of social distancing as well as gave some practical advice for those who wish to become an actor.

Here are the notes from the live talk.

The Coronavirus pandemic destroyed everyone's plans. I was supposed to chair the international jury of the Sofia Film Festival and deliver several workshops. But at one point it all disappeared. The only thing I can do right now is work on my script and finally check all the unread mail.

The question that I am interested in right now is how will we continue to live when the quarantine is over? How are we going to go to the cinemas? It's not just about sitting at home. There is a certain psychological change going on - we are afraid to be around many people. Of course, the situation works in favour of streaming platforms. But they need to produce new content, and many shootings are on hold now.

Now we can work on scripts. But what will modern storytelling be like? How are we going to describe the present word considering the pandemic? Will we ignore Covid-19 or on the contrary.

Someday we will be sitting in Odessa and reminiscing on this crazy time. It may be the beginning of a new one. I am sure we will get some great movies after that. The more turbulent times get, the more interesting things come out. These are certain opportunities.

The situation with a pandemic can lead to an economic crisis worldwide. In some countries, there is state support, in other countries it is smaller. There are also those who have lost their jobs and have no financial support. And it affects the entire industry. We saw the financial crisis of 2008. But what is happening now is a completely different situation.

Every crisis is an opportunity. Maybe now we have the opportunity to change something. We have to think about existing threats to our world, including through global warming and plastic consumption.

One part of me believes that everything will end well. But there is another part, because I shoot dramas. That part of me says, "Oh my God! The world is changing and it will never be the same again!"

I am very curious to see how it would be possible to shoot in such conditions. How technology can be used. Is it possible to shoot while keeping a social distance? Although it may be the film by next Antonioni.

Now there is frustration. Some of the projects that have been rescheduled will not be completed.

For a long time I was shooting 35mm film. But the digitization forces me to adjust. You can shoot something on film, but it will be useless for such platforms like Netflix. But if I could choose, I'd prefer to shoot on film, because I'm old school type in this matter. I wish I could shoot on film at least one more time.

In order for the audience to return to cinemas later, I will have to do something I don't fancy doing and that's producing superhero movies. I am not a fan of this type of movies, I saw only a couple of those films and did not notice much difference. But there are people who love this type of film and there are lots of such fans. On the other hand, more niche cinema will always have its audience.

Movies about the pandemic will be made for sure. The question is whether we will be ready to watch them and what we will see. Will it be some kind of hospital drama or something unexpected, shown from a different angle? So what exactly do we want to see?

When I choose a composer for a movie, I am not guided by any objective categories because music is absolutely subjective thing. Some songs speak to me, some tunes don't.

The full video of OIFF Live talk you can watch here.