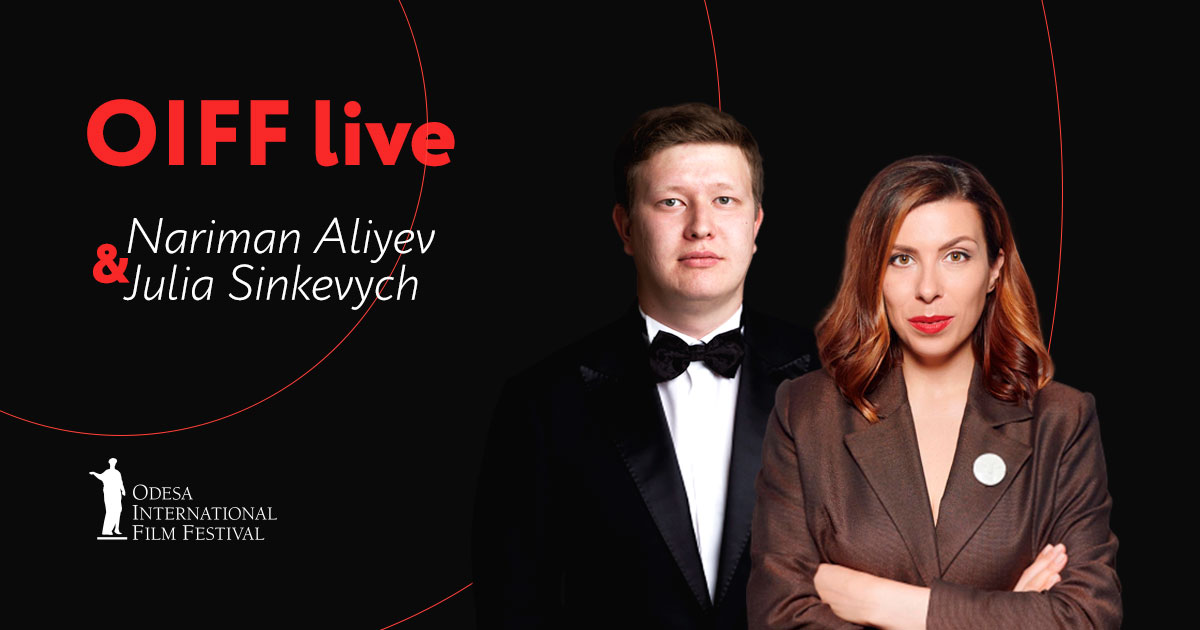 This time Nariman Aliev, whose debut full-length feature won the Grand Prix at the 10th Odesa International Film Festival, was the guest of the OIFF Live. The interview was conducted by the permanent OIFF Live host - general producer of the Odesa International Film Festival Julia Sinkevych. During the conversation Nariman Aliev spoke about his long-term self-isolation, how to be a good director and what he needs a xylophone for.

Here are the notes from the live talk:

I have been self-isolating since March 1. At the end of February I returned from Rome and felt the first signs of catching a cold. Then it was not possible to get an accurate diagnosis and determine what kind of virus that was. So my family doctor advised me to stay home and take my temperature regularly. In fact, my self-isolation had to be over when the whole country just got quarantined.

I started making quarantine diaries so that my parents could see that I was alive and well. It helped me keep myself in shape. Now I have a bit of a crisis of ideas. I have already done the easiest things. I've used everything I had at home. That's why I'm looking for new forms, such as animation. I play with stop motion and have already swiped a Lego set from a kid for that.

My diaries help me deal with my complexes. It is an opportunity to look at yourself from the outside, sometimes with irony, which encourages you to self-reflect. Now there is a trend to read a lot, practise sports and so on. But not everyone has to do it. The main thing is find a place of emotional comfort with yourself and others at the moment. I wonder what the forms of communication will be like in the future. In any case this whole situation will leave its mark. At the moment I am researching these new forms, trying to understand how to use them. For example, books. My reading skills were bad, so going 'live' with a book in my hand is a good idea to improve this skill. Your approach is honest, because you will feel ashamed if you finish reading on the third page in front of the audience. For the time being I am reading "8000 miles of loneliness" by Oksana Shavarska. And I started playing with cards, although so far it turns out not so good. I am also thinking about puzzles. During quarantine I am working on everything I didn't get out of my system as a child. So if anyone has a xylophone, send it to me by mail, I will learn how to play and give it back.

Like any crisis, this situation will have victims. I was lucky to present my film and finish a certain cycle of work on it. The only thing is that "Homeward" was sold to several regions around the globe. For example, the release in the Netherlands was planned at the end of May and it was postponed to the end of July. The same with other territories. That is, not even new films that were just to be released risk never being released. Because the whole market will be taken by major film companies. The same with festivals. I'm sure there will be a lot of movies that just won't be seen. Those films that were to be submitted to the major film festivals will be held up for a year.

Not everyone will survive. In recent years, festivals have been expanding their lineups and adding programs. Now they will cut it. The festival market as a distribution method is changing. Online platforms will be introduced, contact with the audience will take a different form. I think 2020-2021 will be transitional, when it is gonna be difficult to predict anything. Only in 2022 new rules will be established. But competition will increase as some platforms will disappear and some will get lower coverage.

Film education in Ukraine does not allow you to have full experience in film production. Therefore, young directors come to the film set and they have no idea what is going on there.

I have a plan. I will deliberately make my next film a bad one, so that I don't have to obsess over the rule that the second film is never a success. The problem doesn't lie in it being the first, second or third work. I have been preparing for my debut film since I was 16 years old. It was a time of accumulation of ideas, knowledge and tools, which I eventually used in "Homeward". I don't have so much time for my next film. It's like harvesting - after the first harvest you immediately need the next one, but you have no idea where to get it. While working on the second film you still lack experience and materials for the core. I'm working on it right now - I am trying to figure out what I want to do in the next film. It's not about the method of shooting or how the film will turn out to be. It's what I want to say. It is important to understand what you want to speak about and whether you have anything to say at all. This is the most important thing in this process. And the rest I can figure out when I go along.

Cinematography is not a pot of gold, you won't get rich by making films. The director earns royalties from film sales. That is, the larger the box office is, the more you get. You can be supported by cash prizes that you get at the festivals. I received several of those, including one at the OIFF. But do not expect that the director can make a living only out of film production. There are side projects. Actually, I can work anywhere for big money. You can build yourself a career as a director on three bases - theory, practice, taste. I advise you to improve the latter right now. No matter what books you read, no matter what teachers you listen to, on the film set it all comes down to just you liking something or not. If your taste does not make your film a work of art, no matter how much literature you read, it will not help you.