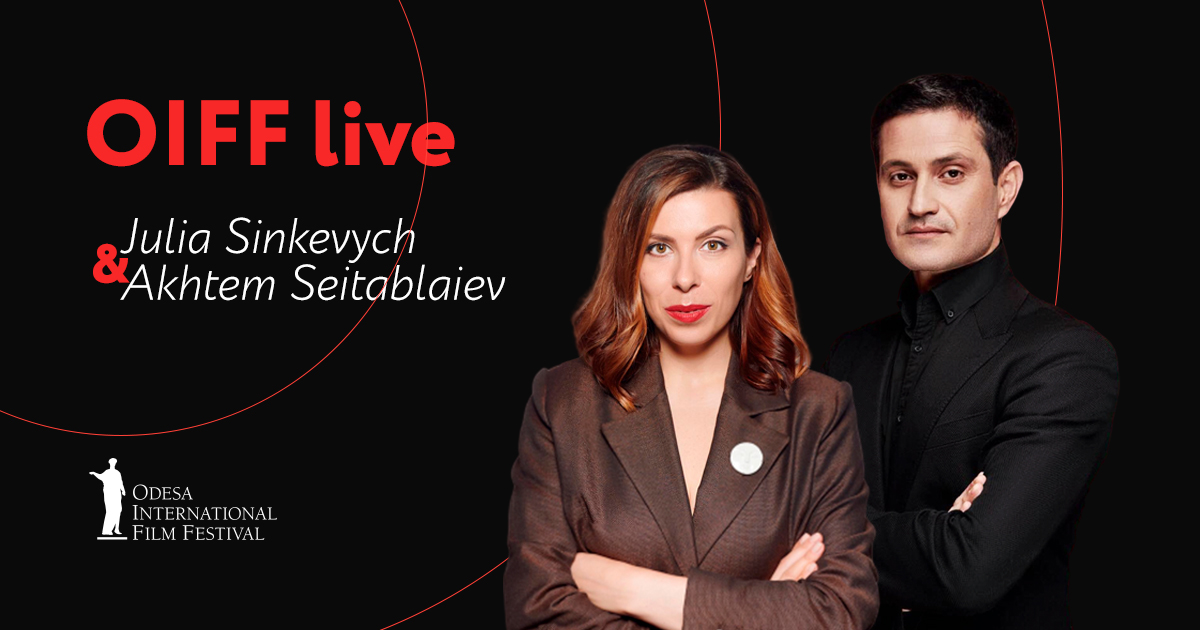 The guest of the third OIFF Live was Akhtem Seitablaiev. During the conversation with the OIFF general producer Julia Sinkevych, a famous Ukrainianin actor and film director talked about how he makes use of self-isolation, what he misses the most and what the success of a creative person depends on.

Here are the notes from the live talk.

Like everyone else I restrict myself from going out without need. I go out only to the Crimean House, where I am working on the post-production of the TV series 'Volunteer' I shot last year. I read and reply to еру emails that have piled up in my mailbox. I was pleased to find out that I have not read a very good script that was sent to me six months ago.

Somehow paper and pencil are more convenient for me than gadgets. Therefore, everyone who works with me knows that it is better not to give me smartphones.

I missed quite a lot of festival films. Now I have the opportunity to catch up. Self-isolation is an opportunity for self-improvement and creativity. Someone like Nariman Aliev is playing tennis or singing, someone is trying other new things. I take great pleasure in looking at creative people and become even more certain what a talented country we are. Especially in the situations where it is difficult not to fall into drama.

During quarantine we all lacked the elementary things we had never paid attention to before. It turns out that going out for a coffee is a very important thing. A person, if not ascetic, is a social being who needs communication and exchange of emotions. Even just staying silent with your friend over a coffee is also a need. For me personally, it is the same as before the pandemic. Just now it feels more acute - the opportunity to see my children who are in Crimea. Almost every day I talk to my family. In Crimea people are frightened too, although at first they did not take the threat seriously.

Our profession took so much time that we wanted to stay at home and just sleep. And now I understand that I want that crazy rhythm back. So meanwhile I'm creating on paper that imaginary world that I can film after it's all over... But now we can not pay in the store with tickets for future films. Filmmakers understand that content for online platforms can help them stay afloat in this difficult time. But here you can encounter such an obstacle as the misunderstanding of many Ukrainians, why they have to pay for movies on the Internet. Maybe TV-channels can ​​broadcast films. Joint efforts are the way to overcome crisis in the film industry, as the audience formation, their tastes and films demand depends on all of us.

There are quite a lot of films built on the story of total illness, e.g. Contagion. Only back in the days when they were shooting the film it was a fiction. And the events we live in now prove once again that life is the most unpredictable playwright. And sometimes even the most talented screenwriter cannot imagine what it is capable of.

One of the eternal questions that creative people ask themselves is what to do when you have an idea and where to go with it. For example, you have a script, but there is no producer. In fact, luck is a big part of our profession. However, in the vast majority, it comes to the prepared person. In a strange way, after a while you begin to see signs that lead you in the right direction. Yesterday you did not pay attention to it, and today the note you heard, the tangible scent of the girl or the scene seen through your window became the missing puzzle in the full picture of your story. In the meantime, try to read your story to small groups of your loved ones. Do not reveal the author and watch how they react. That way you will see genuine interest and be able to improve the script if needed.