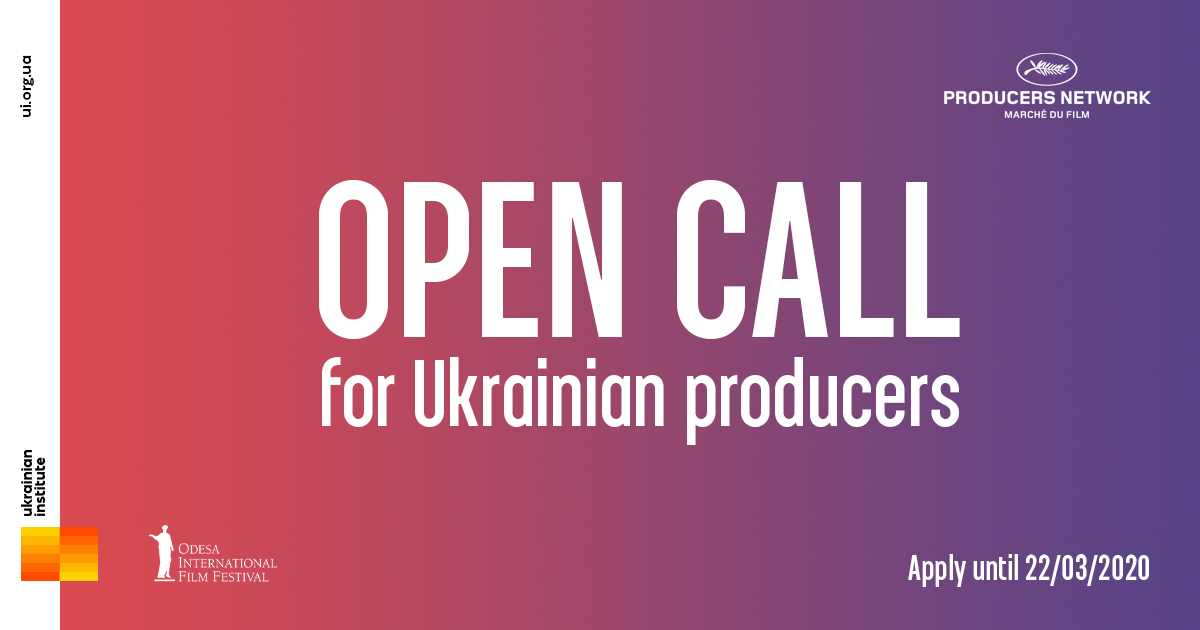 Five Ukrainian producers, selected by a competition, will be able to join the large-scale networking and present their projects to the international film community within the Producers Network section, May 13-19, 2020. Cannes Producers Network will Spotlight Ukraine as a Country of Focus for the first time.

The Marché du Film is the business counterpart of the Cannes Film Festival and one of the largest film markets in the world. Established in 1959, it is held annually in conjunction with the Festival de Cannes with over 12 000 participants from the film industry. Part of this film market is the Cannes Producers Network, an exclusive producers-only event that brings together producers from all over the world to network with international partners and to seize opportunities for international film co-productions.

For the first time this year thanks to the joint efforts of the Ukrainian Institute and the Odesa International Film Festival spotlight on five Ukrainian producers will be presented during Breakfast meetings within Producers Network, which is to be held May 13-19, 2020 in Cannes. Producers will be able to present their projects to the international professional community and establish exclusive contacts with leading representatives of the world film industry, general producer of the Odesa International Film Festival Julia Sinkevych says.

"The Producers Network is a powerful industrial platform that provides film producers with great opportunities for professional networking," Julia says. "The daily program starts with Breakfast meetings and each daily breakfast opens with a spotlight on specific country. For seven participating countries this is a sign that their industry is of high interest. This year Ukraine will become one of the focus countries - it means that the potential of our experts in the field of cinema is becoming more and more visible. We are constantly working hard to promote Ukrainian cinema, and I am sure that Ukraine's official participation in the Producers Network will significantly strengthen our position on the international market."

Selection of the participants will be carried out by the competition commission featuring representatives of the Odesa International Film Festival and the Ukrainian Institute. A highlight of the five selected producers will be included in the official Industry Program Guide and presented at the Breakfast meetings within Producers Network May 16, 2020.

"One of the priority activity areas of the Ukrainian Institute's film sector is to increase professionalism of the Ukrainian film community and strengthen its capacity to cooperate internationally," film program manager of the Ukrainian Institute Natalie Movshovych explains. "That is why it is of the utmost importance for us to facilitate effective integration of the Ukrainian filmmakers into the industry platforms of top film forum. The Producers Network of the Marché du Film is a box of opportunities: over the course of 7 days a large amount of co-producers, sales agents, distributors and film funds of high level gather together at one spot for a couple of hours. These contacts can boost your project and lay the foundation for further international co-production collaboration."

Open call deadline is March 22, 2020. The list of the selected producers will be announced March, 25 on the official sites of the Ukrainian Institute and OIFF. The call is open to producers with at least one feature film with a commercial release within the past three years and at least one project presented at the foreign international film festival.

The Ukrainian Institute is a public institution that represents Ukrainian culture and promotes a positive image of Ukraine internationally. It facilitates international connections between people and institutions, and creates opportunities for Ukraine to interact and cooperate with the rest of the world.

Odesa International Film Festival is the festival which has one of the largest audiences in Eastern Europe. It is an annual film festival held in the cinema capital of Ukraine – Odesa. Founded in 2010 for the popularization of high-level intellectual films among Ukrainian viewers and also for support, development of cinema inside the country and on the international stage.

The Producers Network is the go-to place for producers seeking to make the most out of their time in Cannes. Launched 15 years ago, the Producers Network welcomes more than 500 producers from all around the world for a series of meetings and unique events specifically designed to create opportunities to build your peer network and get international co-production projects off the ground.