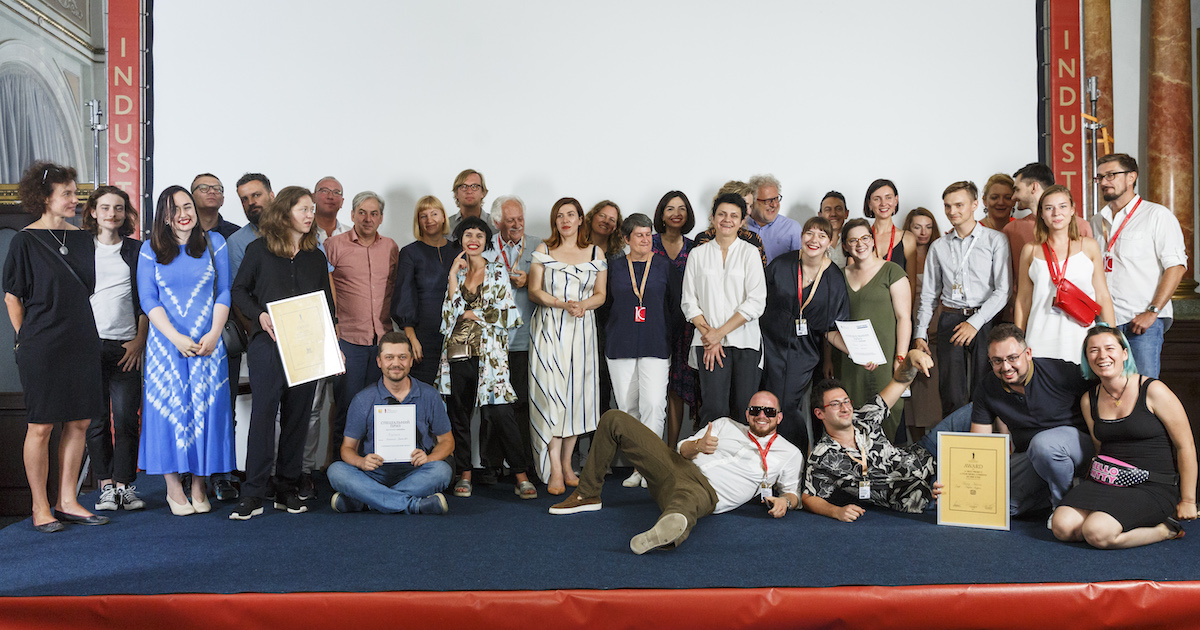 The main events of the day were the presentation of Work in Progress projects, panel discussion "Global Trends in Creative Industries" with the participation of American Oscar-winning director Bill Guttenag, as well as the awarding of the winners of professional contests

On the fourth day of the Film Industry Office, there was a presentation of Ukrainian projects and co-productions with Ukraine, as well as films from the countries of the Eastern European partnership that are on the final stage of production. The moderator of the Work in Progress contest was Martin Blaine, Screen International reporter (Germany).

The presentations were followed by panel discussion "Educational opportunities in the film industry", as well as 1-on-1 meetings with Work in Progress projects.

The next event of the section was the presentation of EastSeries, a competition for television series from Eastern and Central Europe. The contest was organized by the Odesa International Film Festival in partnership with Star Media, ScripTeast, and Series Mania. This year, 6 film projects were presented at the platform.

One more event of the section was the panel "Global Trends in Creative Industries", which took place with the participation of Oscar-winning American director, writer and producer Bill Guttenag. Speakers of the meeting also included Yuliya Fediv, chairwoman of the Ukrainian Cultural Foundation, and Juliya Sinkevych, general producer of the Odesa International Film Festival. The panel was moderated by Natalia Mykolska, researcher at the Center for Democracy, Development, and Rule of Law.

Bill Guttenag noted that in the US, media consumption is increasing day by day. Cinema, video games, digital media - all of them are highly popular. "One must understand that consumers are always interested in the quality of the product. Let's take the example of video games. At the moment, there are very few successful film productions based on video games, but people are still looking for new ways to do this. This is a new and emergin direction for the film industry", he said.

There was also and award ceremony for Work in Progress, East Series and Pitching Awards. Before the announcement of the winners of the section, the OIFF general producer Juliya Sinkevych gave a special award from the Odesa International Film Festival to Katriel Schory, chief international relations consultant at the Israeli Film Fund, for contribution to the development of cinema.

At the Pitching, the following projects were awarded: 60 thousand UAH from the OIFF went to the Georgian drama "Panopticon". The 60 thousand UAH prize from the TV channel "Ukraina" was presented to Valentyn Vasyanovych's project "Reflection". The prize from the global solidarity movement for gender equality HeForShe, established by the United Nations structure of the UN, was given to two projects (each got 60 thousand UAH): Roman Bondarchuk's tragedy "September 1" and Philip Sotnichenko's tragicomedy "La Paliciada". Besides, Daria Zhuk's project "Our Breasts are Our Weapons: The story of Femen" received a Special Mention from the HeForShe movement.

Special prize from Wajda studio - participation in the training Ekran + in 2020 - went to the film "U are the universe" by Pavlo Ostrikov.

In the nomination Work in Progress, the jury awarded the following works: Ukrainian-Swiss project " The Forgotten", directed by Daria Onyshchenko, received a prize of 150,000 UAH from the Ukrainian Institute. The prize from the "Today" news program at the TV channel "Ukraina" - 60 thousand UAH - went to the documentary project "Fragile Memory" by young director Igor Ivanko. The award from the general air carrier UIA - air tickets with a face value of 2000 euros - went to the project "Thunders" directed by Ioane Bobeyko.

EastSeries prizes: the post-production service package for the amount of 20,000 euros from Star Media company went to Ukrainian-Israeli project "Happy Nation". A special award from Series Mania - a personal invitation to take part in the Series Mania Writers' Campus - went to "Gift".