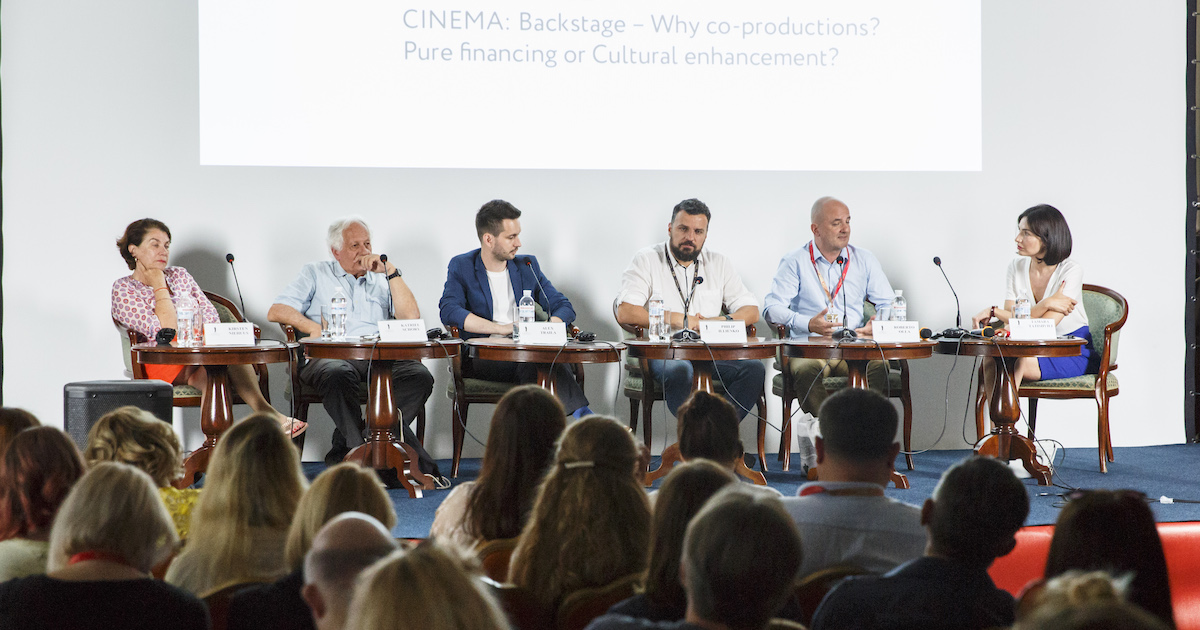 On the second day of the section, there were the conference Cinema: Backstage "Co-production - a way of financing or a means of cultural exchange?", the closed screenings "UA Films Showcase", and presentations "Days of Creative Europe" and "Ukraine: Here We Go!"

The second day of the professional section of the Film Industry Office was opened by the presentation of the EU program "Creative Europe". Success stories and challenges faced by countries with low production potential were presented within the framework of the event. The speakers of the meeting were the heads of the Bureau of Creative Europe Media from three countries: Sabina Brishka Karlich (Slovenia), Adam Pasternak (Hungary), and Kamen Balkanski (Bulgaria).

Within the framework of the meeting a panel discussion "Creative Europe - Participation of Eastern and Central European Countries" was held, moderated by Yuliya Fediv, director of the Creative Europe Bureau Ukraine.

A special event at the Film Industry Office was Cinema: Backstage: "Co-production - a way of financing or a means of cultural exchange?" This year, the topic of discussion was the co-production trends in the film industry. Viktoriya Tigipko, the OIFF president, welcomed the participants, mentioning that this year's Ukrainian film first got into the TOP-10 in box office collections in Ukraine. However, this is only the first step. The next step for Ukrainian filmmakers, according to Viktoriya Tigipko, should be the growth of the box office from the rental of domestic films in Hollywood, and the trend is possible only in case of successful co-production of Ukraine with other countries of the world. Yuliya Sinkevych, general producer of the OIFF, said at the opening: "Today, Ukraine has an extremely high potential, necessary conditions and professionals who can become reliable partners for co-production".

The conference experts identified the current trends in the world and Ukrainian film production. The author and moderator of the event, Tamara Tatishvili (European Women's Audiovisual Network representative), outlined the main mission of co-production strategies in Europe and identified their current trends. "Despite the fact that we are competing in the field of film production, we need to create a common front for the better content and for attraction of young talents", she said. During the first part of the conference, there was a discussion of the role of joint productions in the development of national film industries. In particular, the strategic tasks of national funds supporting the co-production and the field of their influence were named. Pylyp Illienko, the director of the State Film Agency, noted that there are now new groups of ambitious producers with significant experience in Ukraine. In addition, Ukraine is an active co-producer of films sponsored by Eurimage, thus becoming more integratedinto the European film industry.

Katriel Schory emphasized that not every project needs co-production. "Before you start a project, it's important to study all the details of the future work and be prepared for a compromise, because it's a difficult partnership that can be compared to a marriage", added the expert.

During the conference, Marianne Slot drew attention to the fact that the philosophy of co-production implies deep respect and understanding between the producer and the director. "When choosing partners for the project, it is necessary to choose those who share the vision of the director. Only in this case, the end result will be successful for the team," she said. Also, the producer told about important steps of co-production and approaches to choosing different platforms for further promotion of the project.

Participants of the professional section had an opportunity to see the presentation "Ukraine: Here We Go!". At the presentation, Darya Bassel (Docu / Pro industrial platform manager) and Viktoria Leshchenko (Program Director, Docudays.UA) talked about the benefits and opportunities of participation in the largest international documentary film festival in Amsterdam - IDFA.

A series of closed screenings of Ukrainian films «UA Films Showcase» also took place at the conference. The event, organized in cooperation with the Ukrainian institute, has become an alternative representative platform for completed Ukrainian films or post-editions. In particular, in the Rodina cinema, there were five film: "Atlantis" (directed by Valenyin Vasyanovich), "Ivan's Land" (directed by Andriy Lisetskiy), "Blindfolded" (director Taras Dron), "Victor_robot" (director Anatoliy Lavrenishin), and "Toloka" (directed by Mykhaylo Illienko).